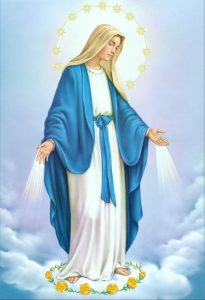 This month is highlighted by the Solemnity of the Blessed Mother in her Assumption into heaven. The “style’ of this month ’s letter to our group, is to serve as a reminder for us all to pray for one another through St. Gaspar Bertoni’s intercession, that we might all one day join Mary now assumed into heaven. May this Solemnity serve as a reminder for all of us to add as an intention of our prayer for one another, that we might all live in an ever more intense hope of our own being called home to heaven in God’s own time.

With the long and spectacular Pontificate of Pope St. John Paul IInd, many still think of his actual living out of his  Pontifical Motto,  Totus Tuus – “all Thine” O Lord. He truly poured himself out into his service of the Church unstintingly, and totally – and provided us all with an example. As we know from the Vatican II Document, Lumen Gentium, there is a universal call of the whole Church to holiness. As the great Dominican theologian, Fr. Garrigou-Lagrange, OP wrote in his Christian Perfection and Contemplation,  that the Sacrament of Baptism when properly developed and unhindered, has within its effects that of sublime holiness is the vocation of all the Baptized.  St. Gaspar helps us with this ideal – let us ponder his teaching from his own Spiritual Diary, called the Memoriale Privato in Italian:

[106.]       … This came from the interior security she [St. Teresa of Avila] had in following God’s will. She strongly believed that there is nothing that could hamper God from realizing what He has established.

Her only fear was that she would not correspond duly to the graces of God.

This is a principle that aims at its being reproduced in each one’s life. But who is this personality about whom Fr. Bertoni writes?  We believe it is a person of the caliber of St Teresa of Avila. The traits are very probably hers. Here are some texts from her Life:

… I happened sometimes to feel tormented by most serious tribulations, having become the object of detraction on the part of this city and of my own Order. Many more afflictions of a different nature gave me further cause for anxiety. In those circumstances, I could hear the Lord telling me: “What do you fear? Don’t you know that I can do anything? What I have promised, I’ll accomplish? (it had always been so, in fact!)”. I then would muster up courage and become ready to embark upon any new work whatsoever. I would face, for the service of God, even greater torments and suffering, though it was very heavy for me. This experience happened so many times that I cannot remember.”  [1]

“The only ambition we can have (and God does not allow any other), must be that we serve His Divine Majesty at any cost.  In my Foundations, I never did anything, as little as it could be, which would have seemed to disagree with God’s will.” [3]

“Whatever we do for Him, is always too little.”[4]

“Blessed be God, because if we do not fail Him, he will never fail us first.’[5]

“Oh, what a misfortune to live in this life! It is like having always our enemies at the door. We cannot leave our arms even for eating and sleeping. We are continuously fearing that somebody, somewhere, should attack and storm our stronghold! … Pray, my dear daughters, that his Majesty should always live in me. Otherwise, after having spent my life in such a miserable way, I would not know how to give myself comfort.” [6]

“It is clear that a person must never rely on oneself. One should never expose oneself to temptation. Even if one had received many graces of Prayer. We can always fall. Be very careful! I beseech you for God’s sake.’ [7]

[144.]       God does not turn down any of those who want to militate under the banners of His Son, and who avail themselves of the means He has prescribed: namely prayer and mortification. Indeed, such a person will have a glorious triumph.

This is a point from St. Ignatius’ Spiritual Exercises. The Meditations of The Kingdom of Christ and The Two Standards have the same conclusion, i.e. the voluntary enrolment in the army of the Lord. However it is necessary to accept the conditions, i.e. to follow Christ in poverty, in self – abnegation, in humility and to take up His weapons which are prayer and mortification. Victory and triumph will follow. We take some passages from the Meditations, which Fr. Gaspar gave the Seminarians in 1811:

… We know where God called us from, but we do not know where will He lead us to.  We cannot imagine what would God do of us,  who are the apple of His eye,  if we did not raise obstacles to His grace, but would instead surrender ourselves always and totally to His hands! …  When we abandon ourselves to Him and follow Him faithfully and steadily and, in all humility, do not take the lead before Him…the Lord adds His share…  [8]

The text is inspired by the verse in Matthew 7:14: Narrow is the road that leads to life.   It could have been an inner voice, or taken for such by Fr. Bertoni who wanted to register it on paper and make it into a personal resolution. It could otherwise have been a generous resolution developed by himself which became a decision of his conscience in imitation of the Saints. What we are sure of is that he took it very seriously. So seriously that his biographers gave the blame to the severe miliary fever, which devastated him in 1812 and put the rest of his life [+June 12, 1853] in jeopardy, due also to his excessive work. He had not spared himself in the ministry and in the acts of penance: fasting and mortification to gain self-control. Furthermore, he was convinced that in order to correspond to the graces God gave him and to follow the mission he felt he was invested with, he could do nothing less than that. For many, especially in later life, this hope is challenged by chronic poor health.

It sounds like part of a dialogue between the Lord and his Servant.  God calls Fr. Bertoni to the undertakings of His glory.  Fr. Bertoni, (we suppose), objected like St. Peter after the first miraculous catch of fish:  Depart from me, Lord, because I am a sinner (Luke 5:8). The Lord replied: I shall forget your sins… (Is 43:25) or I shall never again recall their transgressions (Heb 10:17). He repeats what he had said to St. Paul: I shall show him how many things it is necessary that he should bear for my name. (Ac 10:16). Similar words have been directed to several Founders of Religious Orders. Fr. Bertoni will address these – and in Latin! – to Leopoldina Naudet on 14 Dec 1812. He will even add, jokingly as Saints can do: Take courage! This is the best share which God keeps in store for His beloved ones: … it is not a mouth-full for all!

[170.]       Very few are the people who have the perception of what God would do of them if He was not hindered by them in His plans.

It is the great Ignatian principle which became one of the corner-stones of Fr. Bertoni’s spirituality. Here it is presented in the form in which Fr. Mariani, S.J. reported it. It is worthwhile to quote here the original form as we have it in Bartoli’s book:

… Very few are those who have the perception of what would God do with them if they would put themselves totally into His hands and let His grace work in them. One would never believe that a rough and shapeless trunk of a tree could become a statue which will be admired as a miracle of wood-carving. That trunk, if it depended on itself, would never let itself be cut by the chisels of a wood cutter. Only the wood cutter, as St. Augustine said, can foresee with his artistic eye what could come out of the trunk.  Similarly, there are many people who think they can just live as ordinary Christians. They have no perception that they could become saints if they just let themselves be fashioned by the grace of God and, by making resistance to God’s work, would not spoil the design that God should like to realize in them…[9]

It is clear that the principle written by Fr. Bertoni is a summary of all this.  In a Meditation in Primum Regum to the Seminarians, he used it several times and made a moving application of it. We have noticed it already on 29 July 1809 but did not explain it:

… We cannot imagine what would God do of us, who are the apple of His eye, if we could not raise obstacles to His Grace, but would instead surrender ourselves always and totally to His hands…

For that expression:   apple of His eye Fr. Bertoni quoted Zc 2:8: For he that touches you  (i.e. my priests) touches the apple of My eye …

Let us pray for the intercession of St. Gaspar – and of Mary herself already assumed into heaven – that we might all persevere in our hope in God’s healing Mercy, that we might join them for all eternity celebrating the eternal Thanksgiving in the heavenly sanctuary!

Mary: from Kenosis to Glory – by Rev. Joseph Henchey, CSS