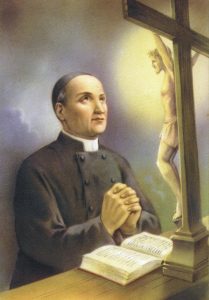 Determined to achieve his goals

Into every era of history, certain persons are born who are ready to deal with their time.  They are ready to jump into the mainstream of the circumstances that surround them and do something to bring about a positive change.  Such people are the doers in life, the ones who are not afraid to fight for their convictions, who believe so strongly in their goals that they seek to overcome all odds to achieve them.  Gaspar Bertoni, Founder of the Stigmatine Community, was this kind of person.

He was born in 1777 in Verona, Italy. The world was going through a time of explosive change. The American revolution was gaining momentum in scattered sections of the North American coast. In Europe the spirit of revolt was fermenting in France. The Italy of Gaspar Bertoni’s time was being plagued by internal strife. Unrest and upheaval divided not only the country itself, but the Clergy within its Church, as well.

This spirit of revolution, hot and furious when it began, gradually turned into a healthy climate of change. Rigid laws and long-standing traditions were tested by people desiring freedom and self-respect. The time was right for a man like Gaspar Bertoni to meet the challenges of the conditions that surrounded him. He was a man of mission, a man not afraid of change of failure.

Looking toward the future

Even though Gaspar Bertoni was born over two hundred years ago, he thought and acted very much like a person of today. Almost from the beginning of his life, he knew where he was going and made sure he got there. Gaspar was both a man of his time and ahead of his time. It is said that when he entered a room or walked along a crowded street, people noticed him immediately. They were instantly aware of his presence. Yet there was nothing spectacular about his stature or extraordinary about his face. He was in fact a rather frail and average looking man. So it was not anything concerning his physical appearance that attracted a second look. From what we must surmise, it was an inner goodness that reached out and touched people.

To find out why this was so, it is necessary to look into the man himself, into his thoughts and into the way he chose to live his life, From the time he was a small boy, Gaspar Bertoni cared about what was taking place around him. He was not content to simply accept what he saw and heard and felt. He sought reasons. He wanted to learn why existing conditions had come to be and what made them evolve into their present form. This need for complete investigation remained strong throughout his life.

During his life, he was able to stand up tremendous pressure, often facing formidable odds. He was in poor health and almost constant pain since early childhood, yet he never allowed his suffering to stop him from achieving what he saw as important. He squarely faced pain and poor health, accepted them and lived with them.

His vocation and first steps

Gaspar came to terms with himself at a very young age. Almost as soon as he was able to think, he knew that he was going to be a priest. His vocation was one that he never doubted, which he embraced and was determined to carry out in a way that would do the most good for the greatest number of people. In order to do this, Father Bertoni developed a strict discipline and order within himself that was to last and serve him throughout his entire life. There was no room for self-doubt, indecision or procrastination in his day-to-day life. There were situations that had to be overcome and he employed every bit of his strength to accomplish this. Profound thought followed by direct action were the tools he employed to meet his goals. His piety and faith were extremely strong, but equally uncomplicated. More than once in his personal diary he noted that he communicated with God as “one friend talking to another”. To strengthen his conviction concerning the great power within oneself, he often recalled and was comforted by Saint Thomas of Aquinas’ belief “that whoever has food in the house should not go outside looking for it. Such a man would go hungry”.

Seeing how much needed to be done, and painfully aware of his inability to do it alone, Gaspar Bertoni sought the help of others who shared his dream. He soon discovered that he had a special talent for attracting young men with true vocations for the priesthood. The responsibility of training these men was one that offered a tremendous challenge. Far too many times he had encountered the indifferent attitudes dictated by tradition. It seemed to him as if young men were poured into some impersonal mold, hardened into cement-like finality by centuries of dogmatic convention. When young men emerged from this mold, they were stereotypes: only performing what was required of them and never giving of their true selves. Father Bertoni vowed that this would never happen to men entrusting to his training. They would be instructed in human as well as spiritual needs. They would be encouraged to think, in a time when thinkers were not popular.

Founding a school and guiding young people into maturity

Early in his ministry, he founded a school in which he sought to provide the highest quality education, when education for the masses was almost nonexistent. Again, through his profound concern for other’s needs, he built an institution that was one of the earliest models of scholastic excellence. By not compromising his ideals, by not being content to merely meet civil requirements and by going beyond what was necessary, Gaspar Bertoni was able to give young people a foundation on which to build meaningful lives.

He recognized the vital importance of seeking vocations in the young and guiding their development to maturity. Gaspar Bertoni strongly felt the hope of the Church was the young men recruited to minister its people. His own uncomplicated faith was contagious. His eloquent, yet very human preaching converted many to the cause. People could understand what Father Bertoni said and they were able to relate to his message. That so many responded to him, is the best proof of his unique power of communication.

Founding a congregation and making it work

But the main and unrelenting dream throughout Father Bertoni’s lifetime was the formation of a select congregation, having its own very special mission. The group, very much in the manner of a modern task force, would be dispatched to the source of diocesan need; correct the situation and then move on. It was a dream that his unflagging determination made come true. Bishops, who were having difficulties within their sees, came to know and depend on this new form of help. Because this concept was far ahead of its time, there were many who doubted its worth. But opposition was something Gaspar Bertoni could handle. He met it with his own self-confidence. He was convinced that his congregation would work; and he made it work.

Possibly the happiest day of his life was November 4, 1816. On this date Father Bertoni formed the nucleus of his congregation. Later these men were popularly referred to as Stigmatines. From this small, initial group of carefully chosen priests and brothers, a community developed that was to spread to all parts of the world.

It was always the contagious spirit of his founder that kept the community going. Kindness and courtesy were shown to all who came to see him, regardless of their social status. Father Bertoni’s only interest was how they thought, how they solved problems and how they functioned in ordinary day-to-day life. By keeping his own life so simple, uncluttered by meaningless activity and earthly greed, Gaspar Bertoni was able to give freely of himself to others.

Other ministries: remarkable confessor and counselor

In the confessional he was very much in demand, a fact that gives us still another important insight into his character. Nobles, Church leaders, as well as the ordinary men, women and children of Verona sought him out as confessor. This was because he offered much more than as ear for sins. Father Bertoni gave wise counsel, encouraged individual thinking and instilled self-confidence in the penitent.

Surely, this was a man cast in no mold but his own. By his example, the clergy of his time and place was revitalized. There was a resurgence of faith. Many doubters became believers and many believers found a deeper and more meaningful relationship with God.

The keystone of his spirituality: the acceptance of the will of God

Gaspar Bertoni’s center of spiritual gravitation was his genuine sense of complete acceptance of the will of God. Gradually, as this sense of total acceptance matured, he found himself developing a deep sense of hope. A hope that translated itself into action and a community of men which would continue to serve God, long after Gaspar Bertoni returned to his Creator.

Final remarks: a man who seized the chances of his time

These then, are some of the things we know about Gaspar Bertoni. They might help explain why his presence was immediately felt wherever and whenever he encountered people. They are the reasons why this man stood apart from his contemporaries. When considered, these reasons are not complicated or difficult to understand. They are the realization of the good inherent in all people. But unlike most other people, Gaspar Bertoni stood for something. He risked taking the chances offered by his time and place. And through self-discipline, education, perseverance and faith, he stood up to widespread forces of indifference and doubt. By seizing these chances Gaspar Bertoni inspired a community based on his own constitution, whose work for the glory of God and the good of all His people continues to this day.