Founder of the Congregation of the Sacred Stigmata

St. Gaspar Bertoni was a priest who lived in Verona [1777- +1853], a city in the North of Italy, during one of the most troubled times in the history of that region. As a city next to the frontier, Verona was a battleground  for foreign invaders, the Austrian troops and the French ones commanded by Napoleon Bonaparte, that were installed on each side of the Adige River, that crosses the city.

In consequence of this, the city was submerged in a climate of excesses and debauchery, that particularly affected the youth and even the clergy.

In face of that terrible scenario, Father Bertoni did not hesitate to devote himself fully to help the people, and since when a seminarian he started to help the injured people, who overcrowded the hospitals; of the youth, abandoned to that hostile environment; and to restore the dignity of the clergy, at the request of his bishop. He found Marian Oratories and taught the children to love and praise the Virgin Mary. He taught them Catechism and used to give them healthy entertainment.

At the request of his bishop, Fr. Bertoni also preached popular missions at St. Firmus parish. For his brilliant preaching, he was  recognized by the Holy See with the title of “Apostolic Missionary”.

Man of deep faith and prayer, Fr. Bertoni lived all his life with the feeling of the influx of God’s will.  In a certain day, before the altar of St. Ignatius Loyola, founder of the Jesuits, he felt the divine will, through the saint, for he found a religious congregation.  At that time, the religious orders had been suppressed, including the Society of Jesus [Jesuits].  But Fr. Bertoni, following the divine will, did not fear, and on November 4, 1816 entered with a few companions [one priest and one lay man] into the building who was given to him with the initial purpose of serving as a school for the youth, but became the birth-house for the congregation he was founding that day.

Inspired by the title he had received from the Holy See and in his profound obedience to the bishops, that are the successors of the apostles, Fr. Bertoni defined the motto of the congregation as: “Apostolic Missionaries in assistance to the Bishops“.

Fr. Bertoni entrusted his congregation to the patronage of the Holy Spouses Mary and Joseph, in their Espousals.

Following the footsteps of their Holy Founder, the Stigmatines are in this world to be Apostolic Missionaries: through the service to the people, the youth and the clergy. 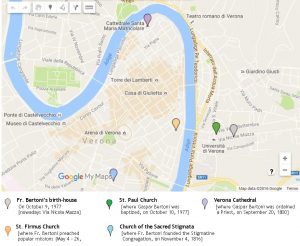