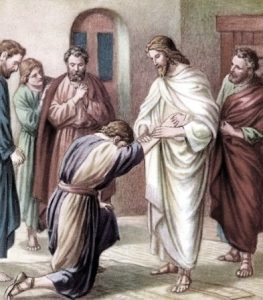 “… But Thomas (who was called the Twin) one of the Twelve, was not with them when Jesus came. So the other disciples told him: “We have seen the Lord!’ But, he said to them: ‘Unless I see the mark of the nails in His hands, and put my finger in the mark of the nails, and my hand in his side, I will not believe!’

… A week later, His disciples were again in the house… Jesus came and stood among them and said: ‘Peace…!’ Then He said to Thomas: “Put your finger here and see My hands. Reach out your hand and put it into my side Do not doubt but believe .”  Thomas answered: ‘My Lord and my God!’…Jesus answered him: ‘…Blessed are those who have not seen and yet have come to believe!’… [Jn 20: 24-29].

Earlier, these Apostolic men did not believe the eye-witness account that St. Mary Magdalene had seen the risen Lord – but her testimony was not believed! Once the Church leaders had been converted to Integral Paschal faith and hope, in their turn, St. Thomas would not believe them! May we today think of him on his feast day that he was the first one converted by the stigmata!  Could we not want to be numbered among those followers of the Risen Lord – being on-going converted to an ever deeper, Faith Hope and Love yearning for healing in the Sacred Stigmata of our Lord Jesus Christ [cf. Is 53:5; 1 P 2:24]?

There is no doubt that still in today’s world, human suffering is so rampant.  And with the marvels of modern medicine, many of us are living longer lives than perhaps many if not most of our loved ones who have gone before us. We cannot help but hear again these words of Scripture: “… Seventy is the sum of our years, or eighty if we are strong… they pass quickly…!” [Ps 90:10].

In our faith, we believe that there is a two-fold content, a two-fold “object” of Divine Revelation: God Himself, and His Plan.  All that happens in life in some way fits into this plan – even the hairs of our head are counted! [Lk 12:7] – no matter how many [or few!] of these may there be.

There are four or five general “reasons” offered to us by divine revelation to help us understand human suffering: 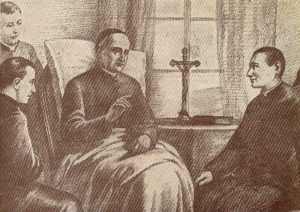 Our beloved Founder suffered very much in his nearly 76 years of life. The reflection this month of July is on a biblical reflection on suffering and some thoughts from Fr. Cornelio Fabro, CSS on these many years in the founder’s life – that contributed to, and shaped his entire spirituality. May God grant that we might all receive such a grace!

Sincerely yours in our Merciful High Priest,

The Mystery of Human Suffering – by Rev. Joseph Henchey, CSS [2017]