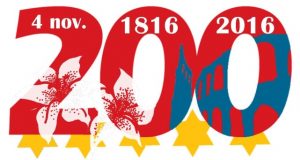 With the beginning of the month of September in a few days, we are fast approaching the date of our second centenary as a religious Congregation at the service of the Church, through the assistance of Bishops, to be observed on November 4, 2016.   To commemorate this in a special way this year, the Stigmatines will observe, as you may know, a very special meeting of the Stigmatine Laity to be held in Rome and Verona, from September 8 to 19.  We will be well represented by our dear members: Page and Ruthie Vandewater, and John Marzilli, from the state of Massachusetts, and Tereza and Vicente Lopes, Brazilians, living in Plano, Texas.

September is important to us as well, as this  September 20th, will
mark the anniversary of St. Gaspar’s Priestly Ordination, September 20, 1800. This date began for a 53 year period of priestly service to the Church of that time offered by his oblation to the Mercy of God [cf. Rm 12:1, ff.]. It ended n June 12, 1853, the day of his being born into heaven.

On the commemoration of our First-Centenary, November 4, 1916 [during World War I], our Superior General at that time was Fr. John Baptist Tomasi.  As a very personal and much-cherished memory of mine is that I served Fr. Tomasi’s last Mass.  It was celebrated on the Feast of St. John the Evangelist, December 27, 1953. During his private Mass, he continually repeated the Creed after the Gospel – so I went to call the Superior, and it turned out that Fr. Tomasi had suffered a stroke. He was put to bed, and we were all present at his death about a week later, on January 2, 1954.

As Superior General, for the first centenary, Fr. Tomasi issued a real classical ‘Circular Letter’ as they were called in those days, to the entire Congregation In that wonderful letter, Fr. Tomasi wrote the following:

It would seem to me that I could not offer a better Preface for these historical recollections which see the light of day in order to recall the first centenary of our Congregation – than the Circular Letter that I sent out to the Confreres on that occasion. Along with this, I will also add the kind testimonies that have come to me from the authoritative persons to whom I thought myself to be duty-bound to have them participate in the remembrance of such an extraordinary occasion.

I wish with all my heart that this publication might animate us all to realize that yearning that I expressed in my letter, for the greater good of our Institute, souls and of the Church.

The 4th day of November 1816, our Venerable Founder took possession of the locality of the House of the Stimmate and established there his dwelling, accompanied by Fr John Marani and by Brother Paul Zanoli, for the purpose of carrying out there the  holy plan with which the Lord had inspired him.  On that day, therefore, there began our beloved Congregation which as a result will complete on November 4th next, the first century of its existence. In this centenary recurrence, the Congregation finds the world in conditions very similar to those which were experienced at its beginning. At that time, there were deeply felt the disastrous results of a world-wide crisis that had just terminated – while the crisis that so travails the world today is even more acute, and we are experiencing all the horrors of an inhuman war and all the alarm for its consequences, which will result from this for the cause of religion and society. Nonetheless, the memory of our beginnings ought to serve as some comfort in the present hour.

There was indeed the desolating spectacle of the devastation wreaked on the religious field by so many human deviations at the beginning of the last century. The occasion of all this served the Lord in order to lead our Venerable Founder to experience within himself the inspiration for a new religious community. He thus manifested, with still an additional argument, how the divine Providence always makes His purposes holy even when situated into the greatest human travail.

The fact that there can be no external celebrations would seem to be fitting for the circumstances in which we are living.  And therefore, with my present Circular Letter, I invite all the Confreres to celebrate on that day such a joyous recurrence, with some religious service of a family and intimate character, for the scope of thanking the Lord for all the benefits showered on our Congregation in this century of its existence, to placate the Divine Justice and to obtain the grace to keep ourselves ready for all He might permit as a just punishment for our own sins and those of others.

Let us pray above all that the Lord might concede to us, even at the cost of some heavy sacrifice, to re-acquire fully that secret of the saints, through which our early members knew how to harmonize together so many values which, by human criteria, are altogether irreconcilable. Our first confreres knew very well how to unite the following:

These conciliations represent the secret of the saints; they remain a mystery to this world, and precisely for this reason, they represent the divine character of the Lord’s works.  This secret ought to be the precious inheritance that our first Fathers and Brothers have left to us.  If we have lost these to some extent, may the Lord grant them to us anew.  And let there be the humble recognition that, in fact, we have lost these values in part, and the vivid yearning that we might reacquire this spirit in its entirety. These are the sole conditions that the Lord asks of us in order to bestow on us this important gift that would constitute for us the most beautiful celebration of our centenary.

In order to facilitate for us the acquisition of such a grace, the reception of the Apostolic Approbation of our Constitutions could indeed contribute to this. It is my hope that during this year, this grace will be granted.

I announce further that as a remembrance of such a happy experience as this is, that there are being published the historical recollections of our Religious Congregation.

I wish from my heart the blessings of heaven on all

As we prepare for this special event in our lives and hearts, I offer a few, reflections of St. Gaspar himself, taken from his diary for the Month of September over 2 centuries ago.

Fraternally yours in the Merciful Lord, 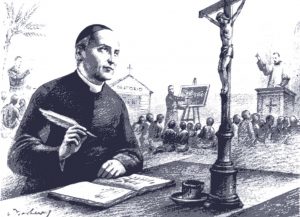 Appendix I:
Some Excerpts from St. Gaspar Bertoni’s Diary